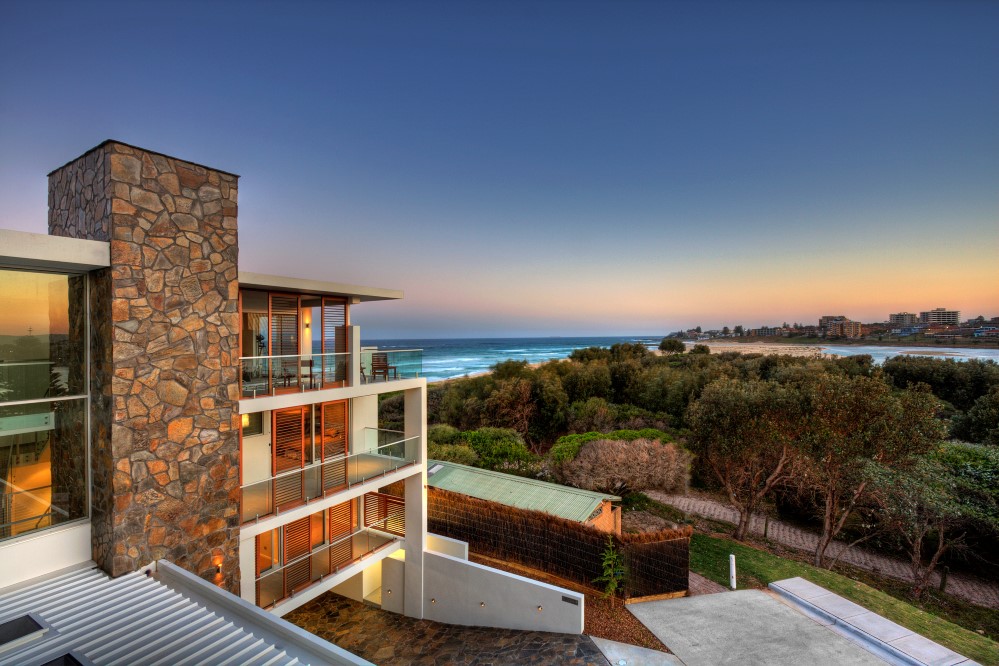 Growing up as the daughter of a stonemason with a desire and the skills to design houses, it’s no surprise that Cathy Slater has built a reputation for showcasing the beauty of natural stone in her Slater Architects designs.

In this article, Cathy Slater shares her experiences from building with stone, reveals her personal preferences and gives expert tips on navigating the challenges you may face when incorporating stone into your home.

Before the age of 20, Cathy Slater was designing houses and she drew on her Father’s experience as a bricklayer and a stonemason to give her advice.

Cathy witnessed first-hand how he could incorporate stone into a home. Cathy says, “my Dad influenced me a lot with using stone.

I remember when I was a child, he used to make fireplaces and stone fences and I thought they were beautiful.”

It wasn’t until many years later, just after opening her architectural design practice in the 80’s, that she first designed a house using stone.

“The first time I designed a house using stone was for a stone mason. It was a house on Tumbi Road in Wamberal, and we used sandstone”.

Since then Cathy has regularly featured a variety of natural stones in her designs. Cathy says, “stone is a material produced buy Mother Nature.

There is no necessity to change or adjust it. It is like timber in that sense, a natural product that never dates.”

Sandstone is a soft and porous stone that can weather, particularly in a salt environment.

If sandstone is used on a beachfront property, the salt will attack the stone and it will deteriorate even through it is a stone of that environment.

Using sandstone on a beachfront property can present its challenges however Cathy believes that it’s a more natural stone to use for a beach house.

“Sandstone is probably a better stone to use for the character of the area because it’s a beach stone, however it needs to be sealed and constantly maintained in order to maintain its integrity.”

Cathy explains that to be able to use sandstone on a beachfront house it’s better to use a type of sandstone that has high quartzite which is what she used for the Avoca House.

If using stone for interiors or properties unaffected by the salt environment, Cathy prefers to source her sandstone from her local supplier on the Central Coast, Gosford Quarries.

Limestone and marble can also present similar challenges to sandstone as they are also a soft stone, so when used outside they will be affected by the environmental elements.

Cathy prefers to use limestone and marble for the interiors of her houses. “I particularly love limestone because it’s from the bottom of the ocean and its composition is made from shells, coral and animals that have decomposed over time to form a stone.

I love the fact that the stone was once alive, and you can see the past in its form.”

There are however some instances when Cathy has used limestone for the exterior of a house.

For the Point Frederick house  Cathy used a limestone with a high quantity of quartz on the exterior and interior of the house including a fireplace.

Cathy recalls, “the client wanted a lighter coloured stone, so we used a limestone with quartz which was beautiful because of the crystal which gave it a bit of a shimmer.”

When featuring stone on the exterior of her houses, it’s no surprise that Cathy’s preference is bluestone. “Outside I prefer to use the darker stone.

My preference is bluestone, which is a form of basalt. It’s a very hard stone which doesn’t break down from acids or salt in the air so it’s durable and aesthetically it’s really beautiful.”

Unlike softer stones like sandstone and limestone, hard stones like basalt and granite don’t weather and don’t grow algae meaning they are a lot more durable in an outside environment. “It’s long-lasting and timeless.

You don’t have to repaint or replace it, it’s there forever” Cathy says.

When sourcing bluestone for Slater Architects, Cathy says “Adelaide is my favourite.”

Bluestone can vary in colour depending on the area in which they are sourced. “If it comes from Adelaide it’s very rich and earthy colours, like browns, blues and greys. But if it’s sourced from Victoria it’s a grey blue.”

COST OF BUILDING WITH STONE

As a building material, stone can be very expensive compared to other manmade products.

In addition to the cost of the product, the labour can also be expensive.

Cathy says, “the labour is so intense, it can take hours to lay a square metre of stone because the stonemason needs to find all the pieces to make the puzzle, put it out on the floor to start off with, then put the puzzle on the wall and that can be quite tedious, labour-intensive and costly.

It’s usually the first thing to go when I need to cut down the budget.”

Building with stone has become more popular in recent years which has meant the supply has increased.

Cathy explains, “more people are bringing it in from overseas, where it used to be that you could really only get your local or Australian stone but there didn’t seem to be as much stock and supply as we’ve got now.”

Stone has a high thermal mass, so used correctly with the right orientation there is a cost advantage to using stone as the home will stay warmer for longer reducing your need to use heating appliances.

Cathy says, “if you have a marble or a limestone floor and you’re facing the sun it will warm up during the day and radiate that heat back into the house.

Or if you’ve got a stone wall or a fireplace it will absorb the heat and radiate it back through the house during the evening.”

ENVIRONMENTAL BENEFITS OF BUILDING WITH STONE

Natural stone is an environmentally sustainable building material. It comes from the earth, so whether it be from a volcanic eruption or a sedimentary process, it won’t require any manufacture other than to cut into pieces in order the use it as a construction material.

As it’s a natural product, building with stone is more environmentally friendly than some manmade products that may be produced using chemicals.

Cathy says, “you just need to be environmentally sensible what you use and where it comes from when sourcing stone.

If you’ve got a natural stone in your area, you’re better off to use that and source it locally than have high transport costs like bringing it from another Country for example.”

Cathy has designed houses on acreages where she has been able to source the stone directly from the property.

“The Valley House used stone from their acreage. The owner was a stonemason, so he had the equipment to be able to saw it and cut it.”

Using stone from your own property is very environmentally friendly as you reduce all transport costs and manufacture. “They are straight out of the earth and you use them.”

CHALLENGES WITH BUILDING WITH STONE

Stone can be used as a feature for fireplaces, floors, kitchen benches and even water features.

When using stone for a fireplace or a feature wall Cathy explains that you need to be conscious of the weight of the product.

“Generally, the inside walls are more lightweight so you have to stick the stone on the lightweight substrate, and you’ve got to make sure you can support the stone.”

If you’re planning on displaying a TV on a wall of stone, Cathy says “the TV wouldn’t usually be fixed to the stone because the stone has a rippled surface.

So, you need to pack it out so that you get a decent corner from the stone.”

“With stone water features, you need a backing to be able to chase the pipes into and then come through the stone.”

This all gets built in when the stonemason is laying the stones and the plumber is laying pipes in at the same time.

When building with stone, it is generally a 30-50mm thick cladding which is glued or mortared onto a wall. Working with large expanses can present a challenge.

Cathy recalls one house where she was faced with this challenge. “We’ve had a wall that was 6 metres high, the weight of that stone on the face of the wall was huge.

They were big blocks of various sizes to give it a random look. You can imagine how heavy each piece of the stone would be and you’ve got to build a wall that’s 6 metres high and make sure it sticks.”

Cathy explains how they tackled this challenge. “We put mechanical fixings in the substrate wall which meant that we had metal fixings to be able to hold the stonework in place.

We used a crane that lifted the stone up onto a scaffold and then the stonemason fixed it to the wall by hand.”

Contact Slater Architects to discuss how we can assist you with creating your dream home. 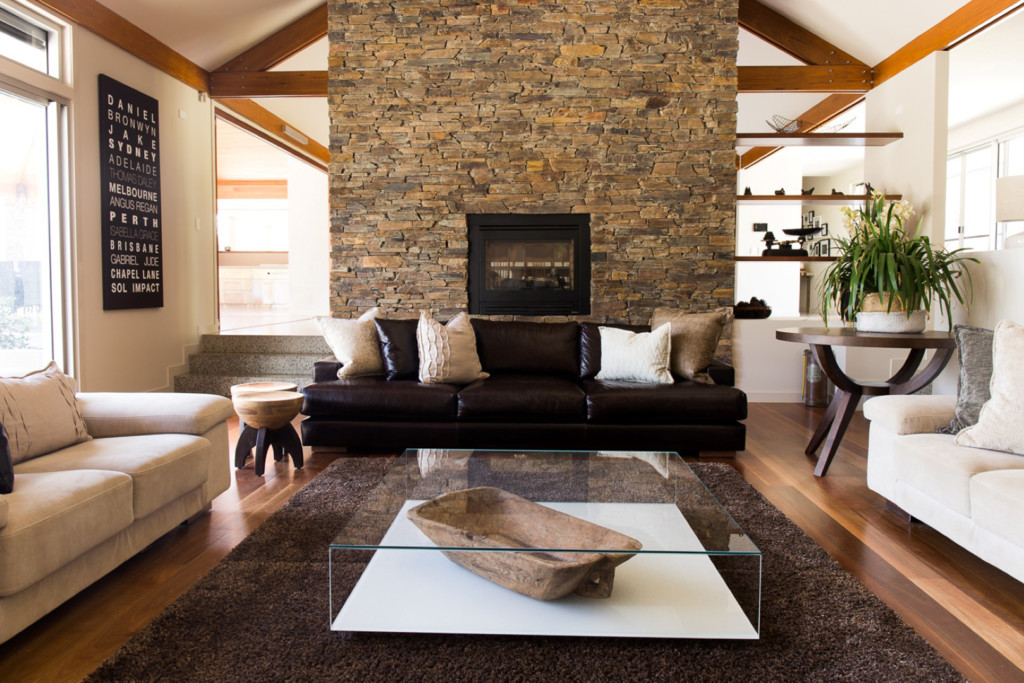 Slater Architects have received many awards for their stone-featuring houses. The Point Frederick house was awarded the 2017 MBA Newcastle award for Custom Built Homes ($2-3 million) and the Rural House received a New Commendation in the Country Division Single Residential from the Australian Institute of Architects.

While every effort is made to ensure that the information contained within this article is accurate and up to date, Slater Architects makes no warranty, representation or undertaking whether expressed or implied, nor does it assume any legal liability, whether direct or indirect, or responsibility for the accuracy, completeness, or usefulness of any information.

Contact Slater Architects to receive a quote for your dream home today.